Or register with email

Join our subscribers list to get the latest news

17. Partnerships for the Goals

Why is this colorful little wheel suddenly everywhere in Japan? 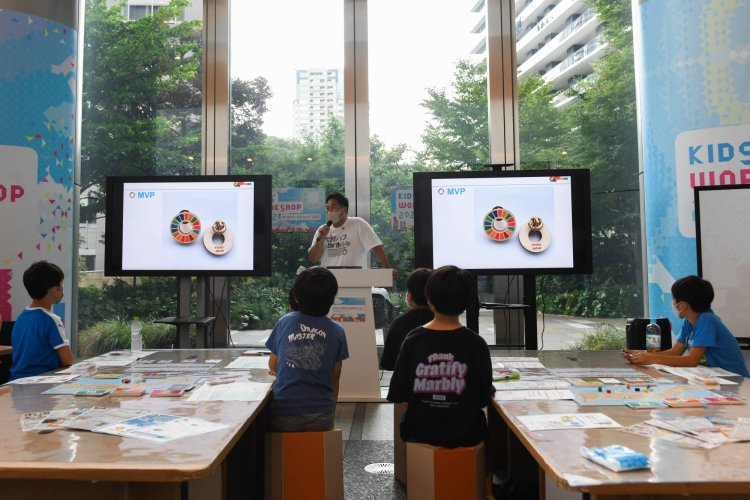 Logos promoting the United Nations’ Sustainable Development Goals campaign on screens at a workshop for children in Tokyo on Aug. 17. | NORIKO HAYASHI / THE NEW YORK TIMES

TOKYO – A few years ago, a colorful new accessory suddenly began to appear on the lapels of dark-suited salarymen across Japan: a small badge, shaped like a roulette wheel and divided into 17 rainbow-colored sections.

Soon, the logo was seemingly everywhere, proudly displayed in hip boutiques, at children’s playgrounds and on the websites of Buddhist temples.

The object of that zeal? The 17-point U.N. framework known as the Sustainable Development Goals.

SDGs, as they are called, encourage every nation to become a better place, with such hard-to-argue-against aspirations as ending poverty, improving education and reducing inequality.

But perhaps no country has embraced the campaign as visibly as Japan, where it has offered a chance to demonstrate the country’s good standing as a global citizen — and where image-conscious corporations have jumped onto the bandwagon with both feet.

Today, there are SDGs board games in Japan. SDGs comic books. Children can play on SDGs playgrounds, and travel companies offer SDGs trips, where travelers learn about how Japan is working toward achieving the goals. An animated music video about SDGs by public broadcaster NHK has more than 930,000 views on YouTube.

In the United States, when people have heard of the development goals at all, it is often from rightwing media portraying them as part of a radical socialist plot. A less polarized, more community-oriented (and perhaps less cynical) Japan has coalesced around the goals as a feel-good, and in theory do-good, endeavor.

The goals became official national policy in 2016, when the government established a task force on them under the prime minister. But it wasn’t until the next year — when Japan’s biggest business federation, Keidanren, added them to its charter — that they started appearing on suit jackets nationwide.

Over the past year or two, the term SDGs — referred to in Japan by the English letters — “has really become a part of daily conversation,” said Rie Takeshima, who leads a division of the marketing giant Dentsu that employs 320 people to advise companies on incorporating the goals into their businesses.

“There’s no industry, no company, where SDGs aren’t relevant,” she said. 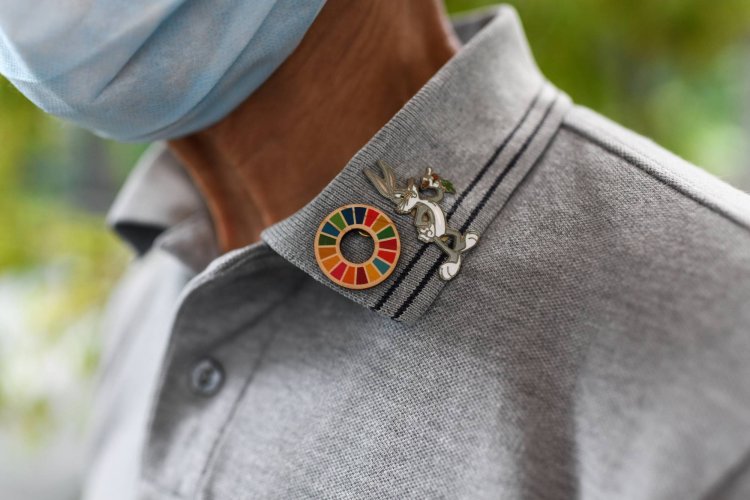 Perhaps no country has embraced the campaign as visibly as Japan, where it has offered a chance to demonstrate the country’s good standing as a global citizen — and where image-conscious corporations have jumped onto the bandwagon with both feet. | NORIKO HAYASHI / THE NEW YORK TIMES

Nearly 40% of Japanese businesses were working toward the goals in 2021, according to a survey by Teikoku Databank, a credit research company.

The Sustainable Development Goals are a sweeping vision for improving the lives of the world’s people by 2030, agreed to seven years ago by the United Nations’ membership.

The goals are as ambitious as they are ill defined. In Japan, the government has portrayed both its poverty alleviation efforts and its highly contentious whaling program as examples of its pursuit of the U.N. objectives.

Whales, the argument goes, consume a ruinous quantity of fish, and controlling their population is critical for preserving the oceans’ diversity. An online video from an industry association recommends eating the mammals “to protect the balance of the marine ecosystem and contribute to marine SDGs!”

While hardly anyone in Japan had heard of the development goals three years ago, messages like these are ubiquitous today. A poll by Dentsu found that nearly 90% of Japanese were now aware of the goals. Only around a third, however, could describe them.

Children are roughly twice as likely as their elders to demonstrate an understanding of the concepts, the poll found. The education ministry has encouraged schools to incorporate the goals into their lesson plans, and many parents have dutifully added the subject to their extracurricular activity list.

On a recent rainy afternoon, a group of children gathered in the atrium of an upscale Tokyo high-rise for a series of talks and games meant to familiarize them with the goals and how their country is working toward achieving them.

It was a vacation day, but the 20 elementary schoolers — parents looking on — gamely answered trivia questions about the lives of children in less privileged countries before playing an SDGs-themed board game, somewhat reminiscent of the Game of Life. Investments in programs like wind farms moved players up one of 17 rainbow-colored tracks. Events like a recession or a pandemic set players back. 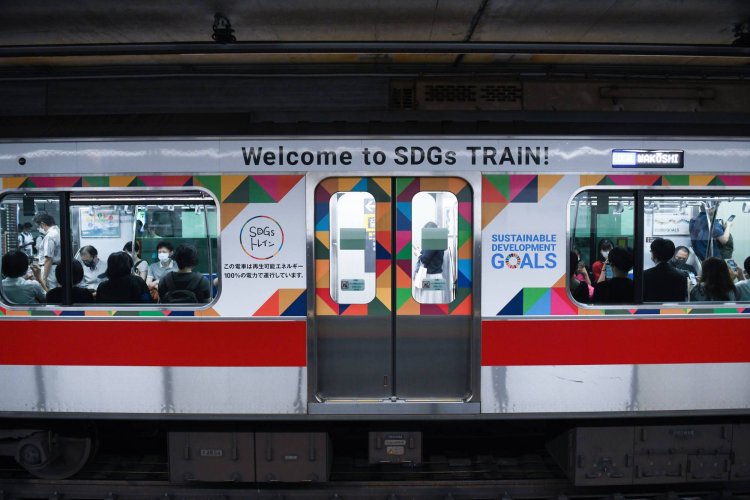 A Tokyo subway train. Nearly 90% of Japanese were now aware of the U.N. goals, but only around a third could describe them. | NORIKO HAYASHI / THE NEW YORK TIMES

One mother, Mayuko Yamane, who had brought her two sons from nearby Chiba prefecture, said the older one, 11-year-old Kotaro, was learning about the goals in social studies class.

“He knows more than me,” she said, adding that her children had begun peppering her with concerns about sustainability and gender equality.

“I was a little surprised that they’re learning about this stuff,” said Yamane, 41. “Thirty years ago, we weren’t doing anything like that.”

It’s not clear how much of that enthusiasm has translated into direct action.

In 2015, Japan ranked No. 13 on the development goals in an annual report compiled by the Sustainable Development Solutions Network, a nonprofit under the United Nations. Like many wealthy countries, it scored highly in categories such as education and hunger alleviation.

Since then, Japan has dropped to 19th place, passed by countries like Poland and Latvia, which have made steady progress while Japan has stagnated. (Finland is in first place, and the United States is 41st.)

A 2021 report by the Japanese government to the United Nations said the country had succeeded in raising awareness of the goals but was still “lagging behind” in the development of “objective” and “science-based” targets for its programs.

While the United Nations has recognized Japan’s progress in areas like education and infrastructure, other problems seem intractable. One glaring area is gender equality. After years of lip service about improving women’s position in the workplace and politics, Japan placed 116th out of 146 countries in the World Economic Forum’s 2022 gender gap report.

There have also been concerns that companies and government agencies are publicly supporting the goals as a way to burnish their image rather than make real change — a phenomenon that has been labeled “SDGs washing.”

Noriko Hama, a professor at Doshisha University’s graduate school of business, said she was glad that the boom around the development goals had brought much-needed attention to issues such as climate change and sustainable production methods.

But when Japanese businessmen began sporting the now ubiquitous badges, she became suspicious, she said.

“Something seemed very odd about the picture of these people, who would normally hate that kind of flashy accessory, showing it off,” she said. 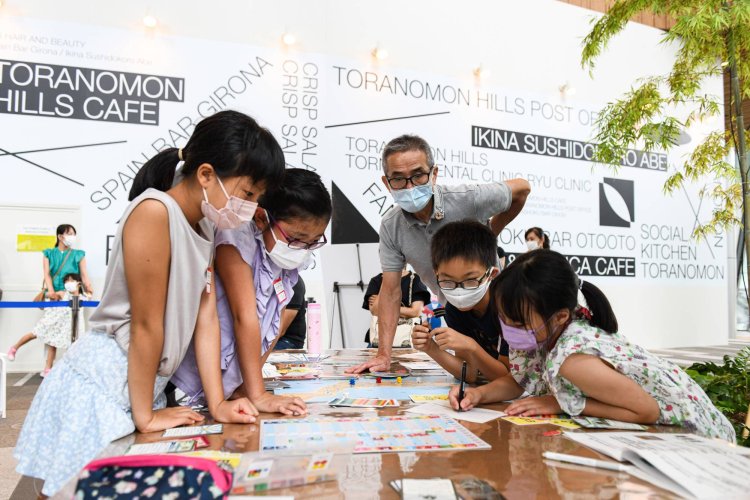 Children play a board game intended to familiarize them with the United Nations’ Sustainable Development Goals campaign in Tokyo on Aug. 17. | NORIKO HAYASHI / THE NEW YORK TIMES

In the rush to jump on board and score some PR points, companies and government agencies have retroactively labeled projects as development-goals-friendly or put the imprimatur on initiatives with only a tenuous connection to the goals.

Even religious groups have gotten in on the act. A Buddhist temple in Kyoto announced that a program intended to cut back on maintenance costs and free up space in its graveyard was part of a push toward the development goals.

Teikoku Databank’s survey found that the largest share of companies — 32% — were making the SDGs objective of “decent work and economic growth” a priority. Support for goals such as “no poverty,” “zero hunger,” “clean water and sanitation,” and protection of the diversity of “life below water” and “life on land” was under 7%.

Keidanren’s members are aware of the skepticism, said Emiko Nagasawa, who heads its program on the development goals, adding that the group needs to work harder to “evaluate progress and make the results public.”

Speaking after the children’s event in Tokyo, Masaru Ihara, a manager at the travel company Club Tourism International, said he had seen many companies put on a development-goals badge more out of a feeling of obligation than out of an alignment with the goals.

“People aren’t wearing it because they understand the SDGs. They’re doing it as a symbolic gesture,” he said.

In much the same way, many of the small restaurants and hotels that Ihara works with feel social pressure to align their business practices with the goals, even if they’re not yet sure why or how.

But as more and more people learn about the development goals, he believes, the pin will move from a fad to a symbol of real change.

“It’s creating an atmosphere where people feel they have to do something,” he said.

Source: Why is this colorful little wheel suddenly everywhere in Japan? | The Japan Times

What is Your Reaction? 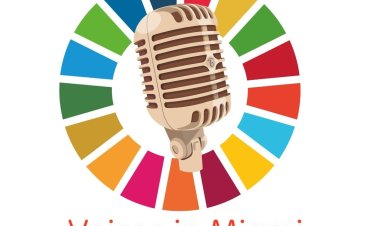 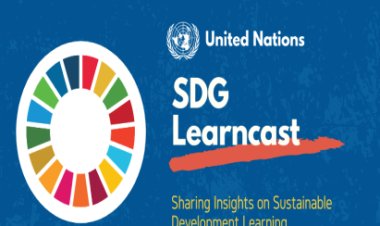 Is knowledge brokering the missing link between science... 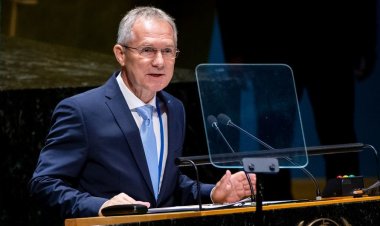 UNGA77: 5 key things to know about the upcoming General...

To fulfil the Paris Agreement we need a circular e...

Interviews About Art Pandemic and Climate Change b...

Kaivon Washington, who is accused in Madison Brook...

1. Are you advancing or impeding progress toward SDG No. 1: End poverty in all its forms?

2. Are you advancing or impeding progress toward SDG No. 2: End hunger, achieve food security?

3. Are you advancing or impeding progress toward SDG No. 3: Ensure healthy lives?

4. Are you advancing or impeding progress toward SDG No. 4: Ensure inclusive education?

5. Are you advancing or impeding progress toward SDG No. 5: Achieve gender equality?

6. Are you advancing or impeding progress toward SDG No. 6: Ensure availability of water, sanitation?

7. Are you advancing or impeding progress toward SDG No. 7: Ensure access to sustainable energy?

8. Are you advancing or impeding progress toward SDG No. 8: Promote inclusive economic growth?

9. Are you advancing or impeding progress toward SDG No. 9: Build resilient infrastructure?

10. Are you advancing or impeding progress toward SDG No. 10: Reduce inequality among countries?

11. Are you advancing or impeding progress toward SDG No. 11: Make cities safe and sustainable?

12. Are you advancing or impeding progress toward SDG No. 12: Ensure sustainable development?

13. Are you advancing or impeding progress toward SDG No. 13: Urgent action to combat climate change?

14. Are you advancing or impeding progress toward SDG No. 14: Conserve the ocean?

15. Are you advancing or impeding progress toward SDG No. 15: Protect terrestrial ecosystems?

16. Are you advancing or impeding progress toward SDG No. 16: Promote peaceful and inclusive societies?

17. Are you advancing or impeding progress toward SDG No. 17: Strengthen the global partnership?

sdgtalks.ai  uses cookies. By continuing to browse the site you are agreeing to our use of cookies.